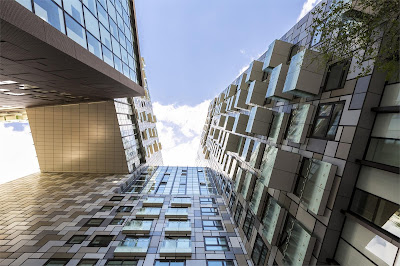 This article was published in the September 2016 edition of AArchitecture

As the annual trollfest that is the Carbuncle Cup gets underway, in which "the ugliest building in the United Kingdom completed in the last 12 months" is crowned in humiliating glory by a crowd of sneering commentators, it is perhaps appropriate to question how -as a profession- we come to value, and devalue certain architects and architecture.

What is “ugly”? It is not simply an issue of whether a building performs badly in relation to its occupants, the street, or is built to a low standard, or else the critics’ and commentators’ ire would be focussed on the mass of terrible, soulless buildings that surround us in Britain.

Instead the focus tends to be on buildings that actually do have a pronounced architectural ambition, but one which happens not to conform to any current notions of good taste. Buildings that wilfully and stridently flaunt an aesthetic which has just gone out of favour tend to be a favourite, or ones that simply do not follow any of the unsaid rules of decorum prevalent at a given moment in architectural time.

What could win the Carbuncle Cup one year, might have been lauded a decade before. Iconic architecture was welcomed in 2000 as the sign of a British renaissance, but by 2016 its examples had become the bankrupt symbolism of a much hated economic model, and the architects of its last progeny have been lambasted where its instigators were once celebrated.

“ugly”, and conversely what we value as “worthy”, is not in any way objective. It is entirely based upon the combined prejudice of a vocal clique who define what is acceptable, and what is not. This changes from one period to the next with the same imperceptible ease as the cycles of fashion, and just as with fashion, those who do not conform are ridiculed or ignored by those who through numerical supremacy and dominance of taste-defining media outlets and forums, constitute a prevailing zeitgeist.

Positive and negative value is all too often simply a question of aesthetic conformity to a set of arbitrary and insubstantial architectural codes of belonging.

Ellis Woodman has recently pointed out how RIBA awards are almost entirely absent of either architecture which creatively engages with any pasts other than that of modernism, or with buildings by architects who operate in the very much living tradition of classical architecture. Why is this? Both strands of creative endeavour are rich with excellent buildings produced by thoughtful and praiseworthy architects, and which engage in complex ways with contemporary issues.

There are unquestioned assumptions and biases providing the uncritical foundations of architectural value judgements everywhere one cares to look. Classicism is ‘pastiche’, unsuitable for contemporary expression, and is reactionary. The language of modernism is progressive, radical, and perpetually avant garde. Abstraction is sophisticated, while figuration is at best comic or satirical, but is mostly ‘kitsch’. Expressiveness, colour and conceit are superficial and arbitrary. Restraint, dourness and severity are serious, intellectual and convey a sense of gravitas.

These value judgements are damaging, ubiquitous, bountiful, ever-evolving, and they also penetrate deep into the heart of architectural education and academia.

Fashions force their way through Architecture schools with even more vigour than they do through the wider profession. The creative freedom and gusto with which students can pursue an idea free of external constraints and contingencies means that everything necessarily becomes more extreme at university. This includes the architectural community’s predisposition towards exclusionary value judgements, which in architecture schools often reach vertiginous levels of prohibition.

Perhaps, in order to expend the vast amount of energy required to complete years of often joyless labour, there is a need for architects and architecture students to feel passionately that what they are doing, and the way in which they are doing their work is the only right, acceptable, avant garde or progressive way. A corollary of this self-imposed delusion seems to be that in order to feel so passionately that what one is doing is right, one must also devalue the efforts of those others whose production, ideas and values, do not conform to yours.

When I was a student at the AA in the early naughties, there was a degree of consensus in the school around a techno-positivist approach to architecture. Zaha Hadid, DRL, UN Studio, Asymptote, Plasma Studio, Emtech and Foreign Office were the models we were referred to. Mention James Stirling and you would either be met by dismissive laughter, a snarky comment, or stared at with wide eyes as if you were some kind of monstrous degenerate. James Stirling, an unquestionably great architect  who had been an exemplar of intellectually engaging architecture only 15 years earlier. But he was out of fashion, by this point he himself had become fodder for the self-affirmation mechanism of the prevailing architects of that moment.

And yet by asking questions, by wielding the simple and infinitely powerful weapon that is the question “why?”, again and again, “why are folded surfaces truly the embodiments of revolutionary politics in architecture?” “why can you not explain to me in clear English what your unit is about?” “why is the pastiche re-hashing of the architectural language of Russia circa 1923 radical, but when it is done with the language of England of the same period it is ‘Disney’?” “Why does quoting a philosopher make my architectural drawing political?”, it is by getting into the habit of asking these questions relentlessly, in search of meaty, truthful and believable answers, that one quickly finds the lack of foundation beneath most architectural value judgements.

Assignation of architectural value is too often entirely about the social mechanisms of acceptance into, and exclusion from, a hallowed centre of playground coolness. This however does not mean that there is no value, only that one has to construct it elsewhere.

The best recommendation I can give to any architecture student is to never stop wielding the question “why?”. Dig underneath the self-assured statements of your tutors, pull the rug from underneath their illusions. But do the same to yourself. Question your own thoughts. Keep asking, keep digging, get into the habit of catching yourself when you come across a building and think “ugh!” and recoil in horror, catch yourself and ask what was it that made you react in that way, dissect your feelings, get to the bottom of your value judgements, see them for what they so often are –a restrictive filter that dramatically narrows the horizons of your world.

It is in this way that one can discover the germ of the greatest kind of value in architecture. Liberated from the stifling value judgements of others that disallow so much from our possible appreciation, free from the suffocating snobbery of the academic avant garde that label so many things as degenerate, one can begin to define specific, precise, meaningful and singular notions of value. One can begin to unearth buildings, qualities, ideas and scenarios that have an importance defined by their own qualities, on their own terms, not by whether or not they are deemed worthy of interest by the posturing of others.

Real value, in architecture as in any other worthwhile pursuit in life, lies in the open gaze of an independent mind.
Posted by Adam Nathaniel Furman at 13:33