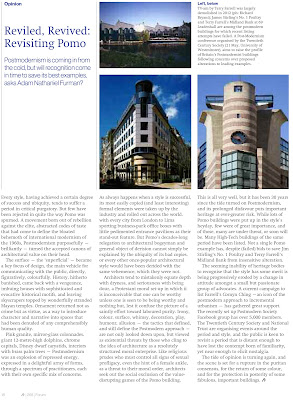 Every style, after having achieved a certain degree of success and ubiquity tends to suffer a period in critical purgatory, but few approaches to architecture have been rejected in quite the way Postmodernism was spurned. A movement born out of rebellion against the elite, abstracted, paternalistic codes of taste that had come to define the bloated behemoth of international modernism of the 1960s & 70s, Postmodernism purposefully –brilliantly- turned the accepted canons of architectural value on their head.

The surface -the “superficial”- became a key focus of design, the main vehicle for communicating with the public, directly, figuratively, colourfully. History, hitherto banished, came back with a vengeance, imbuing houses with sophisticated and evocative combinations of historical elements, as well as leaving wonderfully stranded Mayan temples on the tops of skyscrapers. Ornament returned not as crime but as virtue, as a way to introduce character and narrative into spaces that had up to that point been denuded of any comprehensibly human quality.

Pink granite, mirror-glass colonnades, gigantic 12metre high dolphins, chrome capitals, Disney dwarf caryatids, interiors with golden brass palm trees, furniture that looked like a car crash between giant bars of Piz-Buin, rickety old buildings in run-down bits of the city that would have previously been marked for slum clearance by modernist urban planners, Postmodernism was an explosion of repressed energy that expressed itself in a bewildering and delightful array of forms, through a spectrum of practitioners, each with their own specific mix of concerns.

As always happens when a style is successful, its most easily replicable -and least interesting- formal elements were taken up by the industry and rolled out across the world, with every city from Lima to London sporting countless business park office boxes with little pedimented entrance pavilions as their stand-out feature. But the decades-long relegation to being the architect’s go-to bogey man and general object of derision that Postmodernism suffered, and is still suffering, cannot be explained by the ubiquity of its bad copies, or else every other once-popular architectural style would have been derided with the same vehemence, which they were not.

Architects tend to mistakenly equate depth with dryness, and seriousness with being dour, a protestant moral set-up in which it is inconceivable that one can be worthy unless one is seen to be being worthy and nothing but, lest it confuse the picture of a saintly effort toward laboured purity. Irony, colour, surface, whimsy, decoration, play, humour, allusion, these tactics that defined, and still define the Postmodern approach, are not only looked down upon, but viewed as existential threats to those who cling to the idea of architecture as a resolutely structured moral enterprise. Like the religious prude who must control all signs of sexual profligacy as a threat to his moral order, even the hint of a female ankle, architects seek out the social exclusion of the value-disrupting games of the Postmodern building.

This is all very well, but it has been 20years now, and whilst a lot of postmodern buildings were put up in the fifteen years in which it held favour, very few of them were of great importance, and of those, many are now under threat, or will be in the near future. There are numerous Hi-Tech buildings from the same period that have been listed Grade 1 and 2. Not a single postmodern example has been listed, despite (failed) applications having been lodged to save Stirling’s Number One Poultry and Farrell’s Midland Bank from insensitive alteration.

This seeming inability by the Heritage authorities to recognise that the style is not inherently without merit (a view predicated on the moral puritanism described above) is being progressively eroded by a change in attitude amongst a small, but passionate group of advocates. There is currently a campaign to list Farrells’ Comyn Ching –an iconic project for the style and the postmodern approach to incremental urbanism- which has gathered a huge amount of support, and the recently set up Postmodern Society already has five and a half thousand members, the 20th Century Society and National Trust are organising tours and events around the period and style, and the public are keen to revisit and revaluate an era and period that are distant enough to no longer be tainted by the contempt of familiarity, and near enough to retain an aura of association and nostalgia.

The tide of opinion is turning, and it seems the scene is set for a rupture in the puritan consensus, for the return of some colour, and for the protection in posterity of some fabulous, important buildings.
Posted by Adam Nathaniel Furman at 12:29