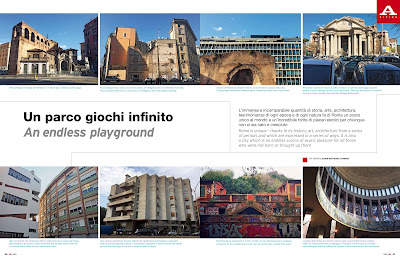 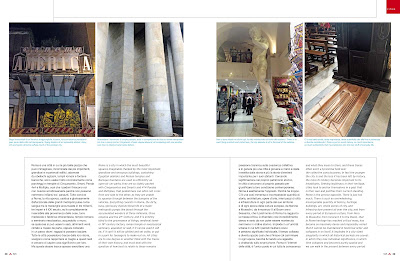 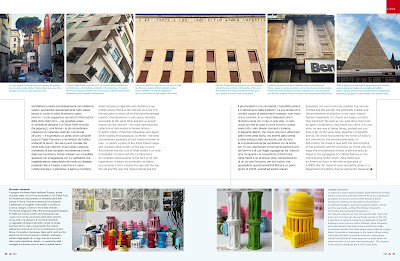 Rome is a city in which the most beautiful squares imaginable, flanked by the most important, grandiose and sensuous buildings, containing Egyptian obelisks and Roman temples and Baroque fountains are used so efficiently as open-air car-parks, they are so tightly packed with Cinquecentos and Smarts and 4*4 Pandas and Multiplas, that pedestrians can often not cross from one side to the other, as they are unable to squeeze through between the bumpers of the vehicles. Everything coexists in Rome, the dirty, busy, gloriously dysfunctional life of a major metropolis pumps like blood through the accumulated wonders of three millennia, three empires and the 21st Century, and it is entirely blind to the provenance of things, medieval tower or nineteenth century factory, roman temple or neoclassical seminary, aqueduct or wall, if it can be used it will be, if it can’t it will be girdled and set aside, put in a park for teenagers to make-out on.

All cities are to one degree or another filled with the traces of their own history, and must deal with the question of how best to relate to those remains and what they mean to them, with these traces often exerting a tyrannical hold over the collective consciousness. In fact the younger the city is and the less it has been bequested by history, the more its history becomes important to its inhabitants. Seeking legitimacy in their heritage, cities look to anchor themselves in a past that is their own and justifies their current standing. Rome is the precise opposite. There is just too much. There is such an overwhelming, incomparable quantity of history, heritage, buildings, art, whole pieces of city, and infrastructure present all over the city, and from every period of European culture, from Nero to Mussolini, from Innocent X to il Boom, that in Rome heritage has reached critical mass, has become so massively dense and impossibly varied that it cannot be maintained in historical order and collapses in on itself. It implodes in a city-sized singularity in which all historical periods are coeval, in which they lose individual significance, in which time collapses and becomes purely spatial and we can walk in the present between every period whilst smoking a cigarette and chatting on our mobile phone. Rome is the internet as a city, it is the one place in which all architectural knowledge coexists simultaneously in one space, instantly accessible at the same time, and just as people mostly use the internet –the most awe-inspiring collection of information in human history- to watch videos of dancing Chihuahuas and Taylor Swift running from paparazzi, so Rome –the most extraordinary assembly of built material known to man- is mostly a place to buy Pope Francis mugs and complain about traffic on the way to work.

And therein lies the crux of what makes it so truly remarkable: its total and utter mundanity, its complete obliviousness in the face of its own importance. It wears its profundity as lightly as a summer t-shirt, mixing the high and the low, the old and the new, the dysfunctional and the grandiose, the sacred and the profane, the narrow-minded and the worldly, the politically volatile and the permanence of tradition in the most relaxed fashion imaginable. Its streets are magic corridors that transform the past as you walk down them into an agent of liberation, that shows you there is no one style, no one way of doing things, instead you can have it all, at the same time, together in flagrante delicto. For those fascinated by the forms of history, but shackled by the narrow and joylessness of historicism, for those in love with the intermingling of the quotidian and the profound, for those who can enjoy the simultaneous echoes of Bernini and Las Vegas in the zigzagging of a 1950s balcony or the intermingling of Borromini, Zaha and an American Diner in the over-exuberance of a 1990s Bar, for those of such sensibility, Rome is a playground of endless, diverse and exotic pleasures.

Posted by Adam Nathaniel Furman at 12:56

Email ThisBlogThis!Share to TwitterShare to FacebookShare to Pinterest
Labels: rome, written by me