The State of Illinois Center 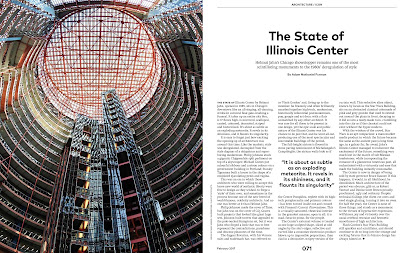 The State of Illinois Center by Helmut Jahn, opened in 1985, sits in Chicago’s downtown like an all-singing, all-dancing, strobe-lit carnival float gate-crashing a funeral. It is vast, takes up an entire city bloc, is 17 floors high, is mirrored, scalloped, canted, coloured, decorated, striped, and historicised. It is about as subtle as an exploding meteorite. It revels in its shininess, and it flaunts its singularity.

It is easy to forget just how exciting the opening-up of architecture was around this time. Like the markets, style was deregulated, decoupled from the stale dogmas of a ubiquitous and super-boring modernism. Philip Johnson stuck a gigantic Chippendale split pediment on top of a skyscraper, Michael Graves put colourful ribbons and cartoon colours on a government building in Portland, Stanley Tigerman built a house in the shape of a conjoined ejaculating penis and vagina.

This was an era in which those architects who were willing to accept the brave new world of aesthetic liberty were free to design as they wished, to forge a ‘style’ of their own, and sometimes in the process become one of the new breed of world-famous, celebrity architects, and no one was better at it than Helmut Jahn.

Philip Johnson made the cover of Time, but Jahn was on the cover of uber-cool GQ. Graves built projects that looked like giant lego sets, Johnson built towers that appealed to the Polo-neck Hamptons set, but it was Jahn that forged a look which was to best represent the contradictions, paradoxes, and obscene pleasures of the time.

The dapper Bavarian with his trademark hat and Versace suits was referred to as “Flash Gordon”, and living up to the moniker he flashily, brazenly, and often brilliantly smashed together Hi-Tech, Modernism, Historically referential Postmodernism, Pop, Googie, and Art Deco, with a flair unmatched by any other architect. It was rare for these to be present in a single design, however the epic scale, and public nature of the Illinois Center was his chance to do just that, and he went all-out, producing one of the most ambiguous, spectacular, and inscrutable buildings of the period.
The full-height atrium is floored in stone paving reminiscent of Michelangelo’s Campidoglio, while the atrium walls look as if the Centre Pompidou -replete with all its primary colours and hi-tech paraphernalia- had been turned inside out and been crossed with Piranesi’s “Le Carceri d'Invenzione”. This is a visually saturated, theatrical interior in the grandest manner, open to all: It is mad futurist pomo, for the people.

The Center’s external volume is treated as one gigantic sculpted shape, sliced at odd angles by the edges of the site, reflective and curved like a consumer electronics product blown up to impossible proportions and clad in a decorative, stripey version of the modernist curtain wall. This seductive alien object, known by locals as “the Star Wars Building”, sits on an abstracted classical colonnade of pink and gray granite, which used to extend out around the Plaza in front, decaying as it did into a ready-made ruin, crumbling out into the city as if the classical could not exist without the hyper-modern.

With the wisdom of the crowd, Star Wars is a perfectly apt comparison. A popular mass market media product in which the future became the same as the ancient past (a long time ago, in a galaxy far, far away). Jahn’s Illinois Center managed to rediscover the excitement of the future -something very much lost in the march of the sub-Miesian tombstones- while incorporating the romance of a glamorous American past, and all orchestrated with a virtuosity and ease that made the building instantly consumable.

The building is currently in danger of being sold by state governor Bruce Rauner. If this were to happen it would, in all likelihood, be demolished. Much architecture of the period was obscure, glib, or as Venturi Scott Brown proudly proclaimed, ugly and ordinary. Despite the Center’s technical failings (the client cut costs and used single glazing, turning the building into an oven for half the year), it is none of those things, and stands as a monument to the virtues of hyperactive expression, wilfulness, joy and virtuosity over the usual cerebral restraint, and hermetic smoothness of high architecture.

Flash Gordon’s Star Wars Building still sparkles and scintillates, and should continue to do so long into the strange and exciting futures its bizarre design has always hinted at.

Posted by Adam Nathaniel Furman at 19:53