Architecture of the Japanese Bubble 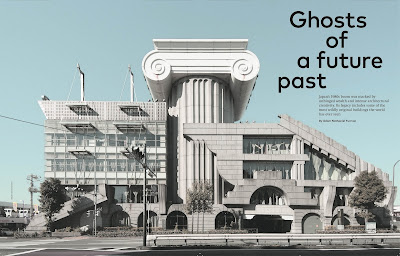 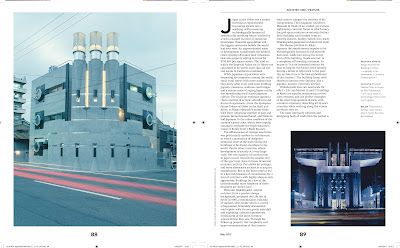 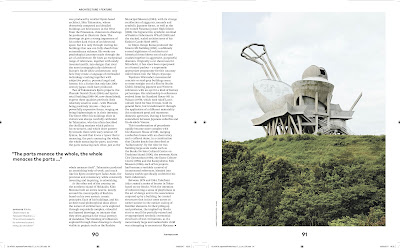 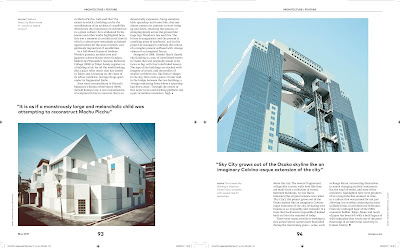 Published in the April 2017 edition of Icon Magazine

1980s Japan was a nation hurtling at exponentially increasing speeds into a seething, self-consuming, technologically fantastical, aesthetically ravishing future, fuelled by a turbo-charged mixture of industrial innovation, financial speculation, and the biggest real-estate bubble the world had ever seen.

An unprecedented wave of new development transformed the nation’s cities, feeding off quite literally insane land valuations that saw property selling in Ginza for $750,000 a square meter, and which meant the land on which the Imperial Palace sat in Tokyo was calculated to be worth more than all the real estate in the whole of California combined.

While Japanese corporations were hoovering up companies around the world, small rural towns with more money than they knew what to do with were building gigantic museums, stadiums and bridges, and Japanese businessmen were happy to spend $80 million dollars for a single painting, a riotous sense of raging hyperreality was manifesting itself across Japanese culture.

From the dystopian future Tokyos of Ghost in the Shell and Akira, to Hayao Miyazaki’s anime films with their collapsing together of the past and the present, the fantastical and the banal, and the Western and the Japanese, to the urban condition of the country’s great cities, which were rapidly coming to resemble Ridley Scott’s hyper-saturated, dark vision in Blade Runner, the frenetic financial explosion ignited an aesthetic chain reaction that saw the creation of a whole ecosystem of new artistic subcultures and forms of expression.

The efflorescence of strange new forms was particularly marked in Architecture, in which a generation of designers produced some of the most distinctive buildings to be found anywhere in the world. Unlike other countries where development is usually at a very large scale, the vast majority of construction in Japan occurs towards the smaller end of the development spectrum. Even in times of normal economic activity this allows for younger, and more alternative architects to acquire commissions, but in the boom years it led to a feverish bonanza of commissions for a host of architects with highly idiosyncratic approaches, buildings by a few of the unfathomably more forgotten of whom are shown here.

Hiroyuki Wakabayashi, a Kyoto architect from a product design background, produced the Life Inn in Kyoto in 1986, a mountainous building of stacked cubes inside of which is carved a fragmented, feverishlyornamental void replete with its own grotto waterfall, and exploding, colourful geometries, reminiscent of the most eccentric of science fiction film sets. Through his following projects, the complexity and hyper-ornamentation of that interior void came to conquer the entirety of his compositions. The Unagidani Children’sMuseum in Osaka is an eroded, pre-ruined, 8-story concrete grid-frame in which every single 3metre grid space contains an entirely distinct little building, each of which are formed from an entirely distinct, highly crafted, but clearly Wakabayashi-generated, architectural style.

His Humax Pavilion in Tokyo perfectly captures both the simultaneous impulse to be technologically fantastical as well as moodily historical, and the desire to encrust the entire form of the building, inside and out, in a bristling cacophony of brooding ornament. As he put it “it is an irrational instinct for man to long for the future while latently having a desire to refer back to the past, this architecture is the best embodiment of this instinct.” It looms with fantastically theatrical menace over Shibuya, like a gigantic, ancient, futuristic artefact. Wakabayashi does not need scale for effect, his tiny Maruto 15 and 17 buildings in Kyoto are equally intoxicating in their alien eeriness, and are perfect examples of his total impregnation of form with evocative ornament, absorbing all of one’s attention when on the streets in which they sit.

The most internally coherent and intriguing body of work from the period was produced by another Kyoto-based architect, Shin Takamatsu, whose brooding, obsessively composed and detailed buildings are best known in the West from the Piranesian, chiaroscuro drawings he produced to illustrate them. The drawings do give a strong impression of his intense and rather dark vision of architectural space, but it is only through visiting his works that one can fully absorb the extraordinary richness of his buildings as fiercely personal explorations of architectural synthesis.
His works are deep, sometimes frightening psychological journeys made through the act of architecture. He fuses an exceptional range ofreferences together with newly invented motifs, into designs which rival the mosticonographically elaborate of Europe’s fin de siècle architecture, only here they create a language of overloaded technology crashing together with subjective poetics, personal angst, and history, in a fusion that only late 20th Japan could have produced.

His Pharaoh Dental Clinic in Kyoto from 1984, and Syntaxretail building from 1988-90 (now demolished), express these qualities perfectly. Both relatively small in scale, with Pharaoh being positively minute, they are powerfully expressive forms, even verging on being frighteningly so in the degree of their intensity. The fierce effect his buildings elicit in visitors was always carefully calibrated by Takamatsu, who has often described the dark and thrilling tensions which pulse in his structures, and which draw passers-by towards them with wary interest, saying of Syntax that it is a “space that is menacing, the parts menacing the whole, the whole menacing the parts, and even the parts menacing each other, just as the whole menaces itself.” Takamatsu produced an astonishing body of work, and much like his Kyoto counterpart Tadao Ando, the precision and consistency, whilst constantly inventing and inquiring, is astonishing.

At the other end of the country, on the northern island of Hokkaido, Kiko Mozuna built an entire oeuvre of buildings, mostly around the municipality of Kushiro, based on his own esoteric cosmic principles. Each of his buildings, and his architectural-philosophical ideas about the nature of architecture were explored through exquisitely complex, colourful, and layered drawings, so intricate that they often approach the visual potency of Mandalas. The blending of influences explored through these drawings is clearly visible in projects like his Kushiro Municipal Museum from 1984, with its strange recollection of ziggurats, mounds, and symbolic Japanese forms, as well as his pre-ruined Nusamai Junior High School, the hyperactive, symbolic overload of Kushiro Fisherman’s Wharf, and the stacked scaled architectures of his Kushiro Castle Hotel.

In Tokyo Kengo Kuma produced the bizarre M2 building, a sublimely surreal nightmare of architectural-historical forms blown out of scale and crashed together in aggressive, purposeful abandon. Originally a car showroom for Mitsubishi, it has since been repurposed as a funeral parlour -a supremely appropriate program for this uncanny intervention into the Tokyo cityscape.

Toyokazu Watanabe’s monumental concrete or steel-grey buildings seem to come straight out of a film by Studio Ghibli, blending Japanese and Western references with an eye for a kind of fantasy picturesque. His relationship to references evolved from his Standard House 001 in Nakano of 1979 that quite literally took Adolf Loos’ unbuilt tomb for Max Dvorak, built its general form, but transformed it through the application of a different materiality (his trademark grey) and numerous domestic apertures, leaving it hovering somewhere between Japanese suburbia and fin de siècle Vienna.

This transformation of precedents rapidly becomes more complex and begins to incorporate far more referents, with his Okamuro House of 1981, merging a suburban house with an observatory, and a coffered dome, in a combination that Charles Jencks has described as “hallucinatory”. By the time he is building large scale works like the Bunka No Sato Cultural Centre on Tsushima Island, the awesome Akita City Gymnasium of 1991, The Kamo CultureCentre of 1994, and the Kamiyubetsu Folk Museum in 1996, each of his projects have become a veritable carnival of incorporated references, blended into fantasy worlds, one of which is specifically crafted, and conveyed, for each of his built endeavours.

Between 1979 and 1984 Takefumi Aida created a series ofhouses in Tokyo based on the game of Toy Blocks. With the intention of rediscovering a sense of playfulness in the act of design and in the associations conjured up by a building, he created structures that in fact come across as rather eerie and sinister in the outsize scaling of what are familiar elements. In their piling-up and profusion, the implied toy blocks of his buildings start to recall the partially ruined and re-appropriated symbolic ceremonial structures of lost civilisations, like a monstrously large and melancholic child was attempting to reconstruct the buildings of Mycenea, or Machu Picchu.

Aida said that “the extent to which a building can be the manifestation of an architect’s sensibility determines the importance of architecture in a given culture,” and as is evidenced by his houses and the other works highlighted here, this was a moment in architectural time in which a culture gave seemingly unlimited opportunities for the most eccentric, and often most gloriously impractical of sensibilities.

In a full-blown fusion of Lebbeus Woods’ Parasitic architecture and Japanese science-fiction Gundam, Makoto Sei Watanabe’s Aoyama TechnicalCollege in Tokyo barely registers as a building at all, for all the world looking like a giant robot insect that has landed in Tokyo and is feasting on the chaos of its urban condition, tearing things apart under its fragmented, robotic limbs.

Even more extraordinarily science-fiction is TakasakiMasaharu’s Kihoku Observatory outside Kanoya City, a vast concatenation of sculptural forms in concrete that is so dynamically expressive, being somehow simultaneously spaceship, and insect like, that one almost expects its columns to start rising up and down, steaming like pistons, or stomping slowly across the ground like huge legs. Masaharu states that “the future is imagination and the present is a melting point of symbiosis”, and in this project, he managed to perfectly embody this notion of a complex present suffused with strange visions of an imagined future.

Designed in 1988, Hiroshi Hara’s Umeda Sky Building is a pair of interlinked towers in Osaka that was originally meant to be twice as big, with four interlinked towers. The tops of the buildings are stacked with imagery of clouds, and the profiles of smaller architectures, like literal villages in the sky. Hara calls a giant “crater” in the bridge between the two buildings a “’vestige’ remaining from where a spaceship had flown away”, a never to be used docking platform through the centre of which dramatically rise a pair of outdoor escalators, high above the city. When not reflective glass, its fragmented, collage-like curtain wall looks like it’s made from a whole collection of varied, flattened buildings. As was Hara’s intention (the original scheme was to be called “Sky City”) the project grows out of the Osaka skyline like a Calvino-esque imaginary extension of the city, levitating over Umeda as an impossibly odd reminder of a time that itself seems equally impossible when looked back upon from the mindset of today.

There were many architects working in this period whose careers have flourished during the intervening years, and some -like Kengo Kuma- reinvented themselves to match the changing stylistic sentiment of the times, but the kind of works, and most of the architects highlighted here, were products of an unreproducibly unique moment in time, in a culture that was primed for not just allowing, but actively catalysing the most unlikely forms of architectural brilliance. From the through-the-looking-glass, unhinged logic of the 1980s economic bubble, Tokyo, Kyoto, and much of Japan has been left with a built legacy of wild originality that rivals any of the other great efflorescences of architectural creativity in human history.

Posted by Adam Nathaniel Furman at 12:25

Email ThisBlogThis!Share to TwitterShare to FacebookShare to Pinterest
Labels: japan, written by me