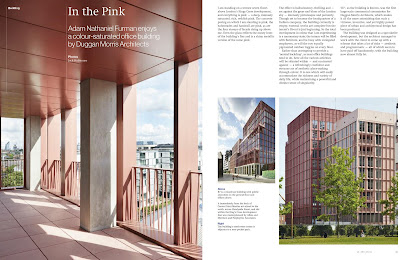 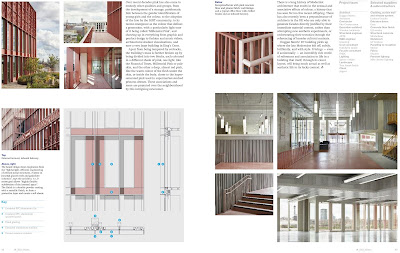 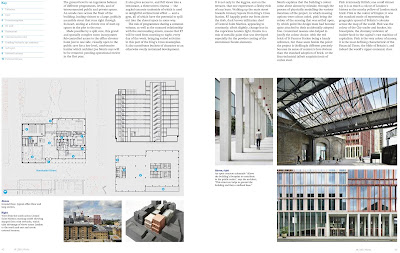 I am standing on a terrace 7 floors above the new King’s Cross re-development, and everything is pink, a deep, intensely saturated rich, reddish pink. The concrete paving on which I am standing is pink, the balustrades and handrail are pink, as are the four storeys of façade rising up above me, even the glass reflects the meaty hues of the building’s fins and is a shiny metallic version of the same pink.

The effect is hallucinatory, thrilling, and set against the greys and blues of the London sky, intensely picturesque and painterly. The building is empty, having been externally completed, with internal fit-out only just beginning, and so the total envelopment in colour that I am experiencing is a momentary state. Set to become Neu-Look’s headquarters, this terrace will be filled with furniture, and be busy with variegated employees, as will the two equally pigmented outdoor loggias on every floor. Rather than the building attempting to provide a “neutral backdrop” as most tend to, here all the various activities will be situated within, and contrasted against, a refreshingly confident and virtuoso act of aesthetic place-making through colour, that will easily accommodate the richness and variety of daily life, whilst maintaining a powerful and distinct sense of singularity.

R7 at Argent’s King’s Cross was the first large commercial commission for Duggan Morris Architects (now splitting into xxxx & xxxx), which makes it all the more astonishing for what a virtuoso, inventive, and yet highly poised piece of urban and architectural design it is. The building was designed as a speculative development, and yet the architects managed to work with the client to come up with a scheme that takes a lot of risks, aesthetic and programmatic, all of which seem to have paid off handsomely, with the building now almost fully let.

The ground level is an ingenious balance of different programs, levels, and of interconnected public and private spaces. An arcade runs across the front of the building, leading visitors to a large, publicly accessible street that runs right through the heart of the building, ending at a future row of start-up spaces in the plot to the rear. Made possible by a split core, this rather grand and spatially complex room, pink concrete floor included, incorporates fob-controlled access to the office elevator bank just to one side, visually open to the public save for a low level, unobtrusive barrier (Morris says there are plans to remove this pending operational review in the first year), as well as access, and full views into a restaurant, a three-screen cinema -the angled concrete underside of which is used to delightful architectural effect- and a gym, all of which have the potential to spill out into the shared space in some way.

The mix of programs sharing a common volume, as well as the nuanced relationship with the surrounding streets, means that R7 will be used throughout the course of each day, morning, and night, and throughout the full 7days of the week, contributing greatly towards bringing varied activities to this part of the King’s Cross masterplan. It also contributes buckets of character to an otherwise overly restrained development. It is not only in the loggias, and on the terraces, that one experiences a fleshy rush of racy hues. Walking up the main street towards Granary Square from King’s Cross, R7 happily peeks out from above the drab, dark brown utilitarian shed of St Martins, appearing to constantly, albeit slightly, change hue in the capricious London light, thanks to a special mix of metallic paint that was developed especially for the powder coating of the aluminium façade elements in the project.

Morris explains that the building’s colour came almost by mistake, through the process of physically modelling the various iterations of the project, in which massing options were colour coded, pink being the colour of the massing that was settled upon, by which point the design team had become quite attached to their accidentally adopted hue. There were also contextual reasons that helped justify the colour choice, with the red of St Pancras being a handy reference, but these seem beside the point, the project is thrillingly different precisely because its sense of context is less obvious than the standard adoption of brick, or the faux-industrial (albeit exquisite) reds of cor-ten.

Pink is intensely British, one could almost say it is as much a colour of London’s history as the murky yellow of London stock brick. Pink is the colour of Empire, it was the standard mode of representing the geographic spread of Britain’s colonies across the map of the world. Pink was the colour of the City trader and banker, his breastplate, the chummy indicator of insider-hood in the capital’s vast machine of capitalism. Pink is the very colour of money, it makes up the most defining characteristic of the Financial Times, the bible of Britain, and indeed the world’s upper economic class.

Over recent decades pink has also come to embody other qualities and groups, from the development of a strange, and problematic link between the gender identification of young girls and the colour, to the adoption of the hue by the LGBT community, to its recent emergence as the colour that defines a generation, with a particularly light tone of it being called “Millennial Pink,” and showing up in everything from graphic design to fashion, to music videos, product design, architectural student visualisations, and now, perhaps unintentionally, a very large building in King’s Cross.

Apart from being tempered by set-backs, the building’s mass is further broken up by being divided into two blocks, each coloured in a different shade of pink, one light, like white skin, like the Financial Times or Millennial Pink, and the other a deep, almost red pink, like the warm colour of the flesh under the skin, or inside the body, closer to the hyper-saturation of the pink used in supermarket princess dresses. It is these associations, and more, that are projected over King’s Cross by this intriguing newcomer.

There is a long history of Modernist architecture that exults in the sensual and associative effects of colour, a history that has seen far too few recent offspring. There has also recently been a preponderance of architects in the UK who are only able to generate facades directly justified by their immediate material context, rather than attempting new aesthetic experiments, or orchestrating their tectonics through the referencing of broader cultural contexts. Duggan Morris’ R7 building brilliantly, subtly, and with style manages to leave where the late Modernists left off, as well as -even if accidentally- bringing an incredibly rich world of references and association to life in a building that itself, through its clever layout, will bring much actual -as well as aesthetic- life to its lucky context.
Posted by Adam Nathaniel Furman at 12:56