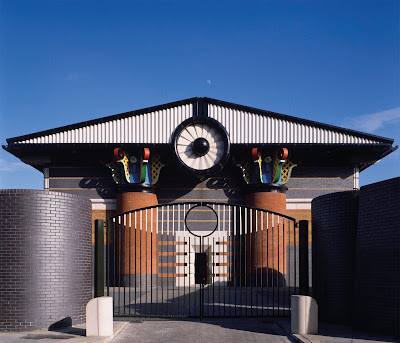 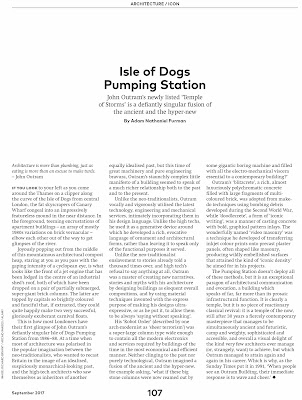 This article appeared in the September 2017 edition of Icon Magazine

If you look to your left as you come around the Thames on a clipper along the curve of the Isle of Dogs from central London, the fat skyscrapers of Canary Wharf congeal into an impressively featureless mound in the near distance, while in the foreground a teeming encrustation of apartment buildings in an array of mostly 1980s variations on brick vernacular, elbow each other out of the way to get glimpses of the river.

Joyously popping out from the middle of this mountainous architectural compost heap, staring at you as you pass with the gaping intensity of a cyclopean eye, is what looks like the front of a jet engine that’s been lodged in the centre of an industrial shed’s roof, both of which have been dropped on a pair of partially submerged, super-giant brick columns. These are each topped by capitals that are so brightly coloured and fanciful, that if extracted, they could quite happily make for two very successful, gloriously exuberant carnival floats.

And thus is how most Londoners have their first glimpse of John Outram’s defiantly singular Isle of Dogs Pumping Station from 1986-8. At a time when most of architecture was polarised in the popular imagination between the neo-traditionalists, who wanted to recast Britain in the image of an idealised, suspiciously monarchical-looking past, and the Hi-Tech architects who saw themselves as inheritors of another equally idealised past, but this time of great machinery, and pure engineering bravura, Outram’s staunchly complex little manifesto of a building seemed to speak of a much richer relationship both to the past, and to the present.

Unlike the neo-traditionalists, Outram vocally and vigorously utilised the latest technology, engineering and mechanical services, intimately incorporating them into his design language. Unlike the Hi-Techs, he used it as a generative device around which he developed a rich, evocative language of ornament and architectural forms, rather than leaving it to speak only of the functional purposes it served.

Unlike the neo traditionalist’s enslavement to stories already told a thousand times over, and Hi-Tech’s refusal to say anything at all, Outram was a master of creating new narratives and stories and myths through his architecture, by designing his buildings as eloquent overall compositions, and by using material techniques he invented with the express purpose of making his designs ultra-expressive, or as he put it, to allow them to be always “saying without speaking”.

His “Robot Order” (described by one arch-modernist as “sheer terrorism”[i]) was a super-large column type wide enough to contain all the modern electronics and services required by buildings of the time, in a most economical and efficient manner. Neither clinging to the past nor purely technological, Outram always imagines a fusion of the ancient and the hyper-new, for example asking, “what if these big stone columns were now reamed out by some gigantic boring machine and filled with all the electro-mechanical viscera essential to a contemporary building?”

“Blitzcrete”, a rich, almost luxuriously polychromatic concrete filled with large fragments of multi-coloured brick was adopted from make-do techniques using bombing debris developed during the Second World War, while Doodlecrete, a form of “iconic writing” was a manner of casting concrete with bold graphical pattern inlays. The wonderfully named “Video Masonry” was a technique he developed of transferring inkjet colour prints onto precast plaster panels, often shaped like masonry, producing wildly embellished surfaces that attained the kind of “iconic density” he aimed for in his projects.

The Pumping Station doesn’t deploy all of these methods, but it is an exceptional paragon of architectural communication and evocation, a building which speaks of far, far more than its prosaic infrastructural function. It is clearly a temple, but it is no piece of reactionary classical revival, it is a temple of the now, still after 30 years a fiercely contemporary masterpiece that manages to be simultaneously ancient and futuristic, camp and weighty, sophisticated and accessible, and overall a visual delight of the kind very few architects ever manage (or, strangely, want) to achieve, but which Outram managed to attain again and again in his career. Which is why as The Sunday Times put it in 1991, "When people see an Outram Building, their immediate response is to wave and cheer".
[i] A Dictionary of Architecture and Landscape Architecture, James Stevens Curl,  P546

Posted by Adam Nathaniel Furman at 10:16