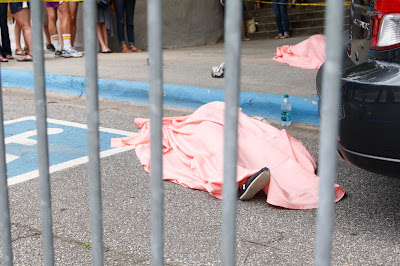 ^aftermath of a vehicular accident, University of Georgia (source)


The opening paragraphs of Karl Ove Knausgaard's 'A Death In The Family'. A thoughtful rumination on our relationship with the just deceased, and its irrational, atavistic infrastructure that forms its own architecture within and under that of the living, as well as motivating instantaneous and universal impulses, actions and rituals that are second nature to us, but which on second glance reveal themselves to be primordial, groundless and strange.

"For the heart, life is simple: it beats for as long as it can. Then it stops. Sooner or later, one day, this pounding action will cease of its own accord, and the blood will begin to run towards the body's lowest point, where it will collect in a small pool, visible from the outside as a dark, soft patch on ever whiter skin , as the temperature sinks, the limbs stiffen and the intestines drain. These changes in the first hours occur so slowly and take place with such inexorability that there is something almost ritualistic about them, as though life capitulates according to specific rules, a kind of gentleman’s agreement, to which the representatives of death also adhere, inasmuch as they always wait until life has retreated before they launch their invasion of the new landscape. By which point, however, the invasion is irrevocable. The enormous hordes of bacteria that begin to infiltrate the body's innards cannot be halted. Had they but tried a few hour s earlier, they would have met with immediate resistance: however, everything around them is quiet now, as they delve deeper and deeper into the moist darkness. They advance on the Haversian canals, the crypts of Lieberkuhn, the islets of Langerhans. They proceed to Bowman’s capsule in the kidneys, Clark’s column in the Spinalis, the black substance in the mesencephalon. And they arrive at the heart. As yet, it is intact, but deprived of the activity to which end its whole construction has been designed, there is something strangely desolate about it, like a production plant that workers have been forced to flee in haste, or so it appears, the stationary vehicles shining yellow against the darkness of the forest, the huts deserted, a line of fully loaded cable buckets stretching up the hillside.

The moment life departs the body, it belongs to death. At one with lamps, suitcases, carpets, door handles, windows. Fields, marshes, streams, mountains, clouds, the sky. None of these is alien to us. We are constantly surrounded by objects and phenomena from the realm of death. Nonetheless, there are few things that arouse in us greater distaste than to see a human being caught up in it, at least if we are to judge by the efforts we make to keep corpses out of sight. In larger hospitals they are not only hidden away in discreet, inaccessible rooms, even the ways there are concealed, with their own lifts and basement corridors, and should you stumble upon one of them, the dead bodies being wheeled by are always covered. When they have to be transported from the hospital it is through a dedicated exit, into vehicles with tinted glass; in the church grounds there is a separate, windowless room for them; during the funeral ceremony they lie in closed coffins until they are lowered into the earth or cremated in the oven. It is hard to imagine what practical purpose this procedure might serve. The uncovered bodies could be wheeled along the hospital corridors, for example, and thence be transported in an ordinary taxi without this posing a particular risk to anyone. The elderly man who dies during a cinema performance might just as well remain in his seat until the film is over, and during the next too for that matter. The teacher who has a heart attack in the school playground does not necessarily have to be driven away immediately; no damage is done by leaving him where he is until the caretaker has time to attend to him, even though that might not be until some time in the late afternoon or evening. What difference would it make if a bird were to alight on him and take a peck? Would what awaits him in the grave be any better just because it is hidden? As long as the dead are not in the way there is no need for any rush, they cannot die a second time. Cold snaps in the winter should be particularly propitious in such circumstances. The homeless who freeze to death on benches and in doorways, the suicidal who jump off high buildings and bridges, elderly women who fall down staircases, traffic victims trapped in wrecked cars, the young man who, in a drunken stupor, falls into the lake after a night on the town, the small girl who ends up under the wheel of a bus, why all this haste to remove them from the public eye? Decency? What could be more decent than to allow the girl’s mother and father to see her an hour or two later, lying in the snow at the site of the accident, in full view, her crushed head and the rest of her body, her blood-spattered hair and the spotless padded jacket? Visible to the whole world, no secrets, the way she was. But even this one hour in the snow is unthinkable. A town that does not keep its dead out of sight, that leaves people where they died, on highways and byways, in parks and car parks, is not a town but a hell. The fact that this hell reflects our life experience in a more realistic and essentially truer way is of no consequence. We know this is how it is, but we do not want to face it. Hence the collective act of repression symbolised by the concealment of our dead.

What exactly it is that is being repressed, however, is not so easy to say. It cannot be death itself, for its presence in society is much too prominent. The number of deaths reported in newspapers or shown on the TV news everyday varies slightly according to circumstances, but the annual average will presumably tend to be constant, and since it is spread over so many channels virtually impossible to avoid. Yet that kind of death does not seem threatening. Quite the contrary, it is something we want and will happily pay to see. Add the enormously high body count in fiction and it becomes even harder to understand the system that keeps death out of sight. If the phenomenon of death does not frighten us, why then this distaste for dead bodies? Either it must mean that there are two kinds of death or that there is a disparity between our conception of death and death as it actually turns out to be, which in effect boils down to the same thing: what is significant here is that our conception of death is so strongly rooted in our consciousness that we are not only shaken when we see that reality deviates from it, but we also try to conceal this with all the means at our disposal. Not as the result of some form of conscious deliberation, as has been the case with rites such as funerals, the form and meaning of which are negotiable nowadays, and thus have shifted from the sphere of the irrational to the rational, from the collective to the individual –no, the way we remove bodies has never been the subject of debate, it has always been just something we have done, out of a necessity for which no one can state a reason but everyone feels: if your father dies on the lawn one windswept Sunday in autumn, you carry him indoors if you can, and if you can’t, you at least cover him with a blanket. This impulse, however, is not the only one we have with regard to the dead. No less conspicuous than our hiding corpses is the fact that we always lower them to ground level as fast as possible. A hospital that transports its bodies upwards, that sites its cold chambers on the upper floors, is practically inconceivable. The dead are stored as close to the ground as possible. And the same applies to the agencies that attend them; an insurance company may well have its offices on the eight floor, but not a funeral parlour. All funeral parlours have their offices as close to street level as possible. Why this should be is hard to say; one might be tempted to believe that it was based on some ancient convention that originally had a practical purpose, such as a cellar being cold and therefore best suited to storing corpses, and that this principle had been retained in our era of refrigerators and cold-storage rooms, had it not been for the notion that transporting bodies upwards in buildings seems contrary to the laws of nature, as though height and death are mutually incompatible. As though we possessed some kind of chthonic instinct, something deep within us that urges us to move death down to the earth whence it came."

Posted by Adam Nathaniel Furman at 13:44 No comments: